One of the ways I put my talents as a software developer to use for the church is I maintain the Catholic Stuff You Should Know website. I love reading stories about interesting bugs other developers have encountered, so I thought I’d share my own story about a bug I recently fixed on catholicstuffpodcast.com.

To understand the bug, it will be helpful to have a little bit of the backstory. The Catholic Stuff You Should Know website was originally built with WordPress. In 2016, I migrated the website off of WordPress and onto Jekyll (which is what the site still uses today). As part of that migration, I added episode numbers to all of our existing episodes to help keep things organized.

I even still have the simple PHP script I used to pull these episode numbers out of the audio filenames (which already had them) and add them to the Jekyll frontmatter for the episode so we could show the episode numbers on the website. It’s a little bit hacky, but it got the job done.

Recently, one of our listeners notified us that the episode numbers for some of our episodes from summer 2010 appeared to be incorrect. I took a peek, and sure enough, the listener was right! 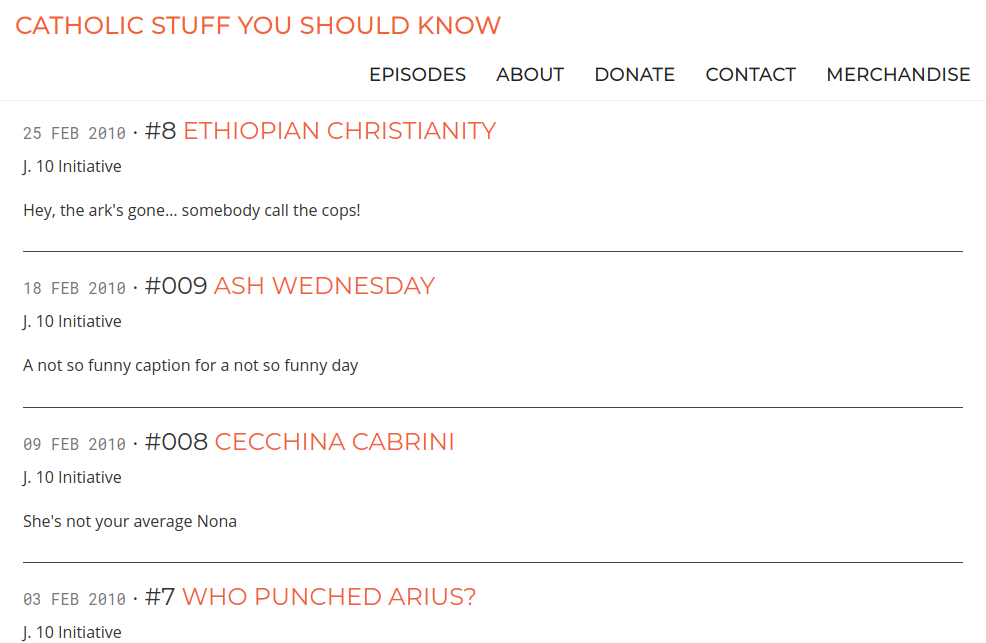 I looked around a little more and compiled this list of our first 24 episodes, as they appeared on our website.

If you can correctly identify the bug from that list, well done! And if you can’t… Neither could I, initially. I was perplexed – there’s nothing complicated about the way our episode numbers work. We simply pull them from the YAML frontmatter for the jekyll blog post. From this initial list I had compiled, it looked like whatever was assigning episode numbers had somehow ignored a few episodes in the numbering.

Because this is a Jekyll site, each “episode” is just a “post”, which is just a markdown file in a folder in the repository. I broke out some Unix tools to try to pin down the problem. As I write this, the most recent episode on our website is #471. And that matches the number of files in our _posts directory.

Well, it’s good news that our total number of episodes matches the current episode number. But what the heck is going on then? Knowing that our frontmatter uses a number: key for episode numbers, I tried this:

At a glance, that list looks correct. Let’s look at all frontmatter “source” for all the numbers for all episodes from 2010.

Still confused, I started looking at a specific post in more detail. I started with February 2010, the first month where broken posts show up. And I noticed that the “Ethiopian Christianity” episode was showing number 8 on the site but the frontmatter was number 10:

Can you spot the bug? Our episode numbers were padded with zeros - a common practice that makes them sort correctly in filenames. (Remember, I initially pulled these episode numbers from our audio filenames.) But in this case, Ruby’s YAML parser was interpreting the number as an octal number because of the leading 0!

Fortunately for us, this ceases to be a problem after episode 100 (when we no longer have any leading zeros). So our most recent 371 episodes are numbered correctly. But some episodes between 1 and 100 have incorrect numbering. In fact, most do. All numbers between 7 and 100 that are valid octal numbers will be incorrect because only numbers 1-7 have the same representation in octal and base 10. Some numbers, like 009, don’t parse correctly as an octal number. I think, in this case, the YAML parser falls back to a string, which is why the leading zeros showed up on the web for these numbers.

Although the problem was hard to identify, The fix is easy – we just need to remove the leading zeros from our YAML!

So that’s how we found and fixed an episode numbering but for the Catholic Stuff You Should Know website. I hope you enjoyed the story. This wasn’t the first bug I’ve seen related to parsing octals, and it probably won’t be the last! So it’s good to remember this can happen any time you see a leading zero on a number - particularly number literals in YAML or code. And despite this small bug, working with Jekyll for the last 4 years has been a pleasure overall.

Catholic Stuff You Should Know is a weekly podcast that explores Catholic topics. Learn more at catholicstuffpodcast.com.